Yoga at the DIA

I parked the Jeep on the street outside the DIA (Detroit Institute of Arts).  It is Saturday morning.  I am dressed lightly, totally unprepared for the twenty degree temperatures and the arctic wind.  They have a new fancy way of paying for parking using a kiosk along the curb but the damn thing was not taking my credit card.  Luckily Tinkerbell, her boyfriend and the T-Rex arrived at the same time and were parked a few spaces away.  Tink's boyfriend put his card in the kiosk for me.

"Why do we have to go all the way downtown to do yoga?"  I ask Tinkerbell a few days earlier.  "Have you even done yoga before?  My yoga studio is much more convenient."

She as assured me that it would be more fun doing yoga in the great hall in the art gallery.  I had my doubts.  The T-Rex was even less enthusiastic.  It is a good way to get people down to the art gallery but in February?  The non-profit who organizes the events does a good job.  They are a mobile studio and they organize events in various locations around the city.  It is a great way to introduce a different crowd to these locations and give access to yoga to a different crowd. 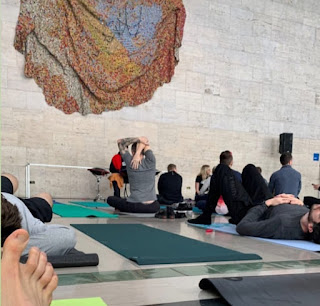 That's me stretching my arms in the center

Posted by Bathwater at 2:43 PM

Email ThisBlogThis!Share to TwitterShare to FacebookShare to Pinterest
Labels: Me, The T Rex, Tinkerbell, yoga

Followers- Be The First, The Few!